Before we start this story, let's retrace our steps back to the beginning of the Kings age in Israel. Saul was Israel's first king, but was removed by God when he became disobedient. David was the second king of Israel and built the Kingdom of Israel into a powerhouse nation, established its capitol in Jerusalem and laid the plans for the building of the temple. Solomon, David's son and the third king of Israel, built the temple but in his later years turned away from God to the idols of his many foreign wives and concubines. He also drove the Israelites hard and demanded much from them as he built the temple. Reheboam, Solomon's son, was even harsher to the people, and 10 northern tribes rebelled and established Jereboam as their king.

And so the kingdom of Israel split into two kingdoms: The Southern Kingdom, or Judah, with Jerusalem as its capitol, and comprised mostly of the tribes of Judah and Benjamin; and The Northern Kingdom, or Israel, with Samaria as its capitol and comprised of the other 10 tribes. Judah had a mix of good and bad kings. Israel had 100% bad kings who disobeyed God, worshiped false Gods and generally led the Northern Kingdom into chaos. There were many prophets who tried to bring God's message to both Judah and Israel, with only limited success.

So, now we find ourselves in 2 Kings 17. Hoshea is the last king of Israel. Again, he was a bad king and didn't follow God, but 2 Kings 17:2 tells us that at least he wasn't quite as bad as the others who came before him. The King of Assyria began to attack Israel and eventually he overtook Samaria and carried away many of the people of Israel to Assyria. Then the King of Assyria took other people from other countries and settled them into the towns around Samaria so those who were left in Israel would be diluted and would lose their identity as Israel. It worked. Even though the people of Israel still worshiped God, they also chose to worship all the gods of the people who came to live in their land until eventually they barely resembled the nation established by God through Abraham, Isaac and Jacob. Read 2 Kings 17:7-23 for a very concise description of how Israel fell.

To this day, Israel (or the Northern Kingdom) is referred to as the 10 Lost Tribes of Israel because after the Assyrian captivity, those 10 tribes completely intermixed with other nations and ceased to exist as a nation. They were completely wiped off the map as a nation because of God's judgment of them. In the New Testament, this intermixed group are known as the Samaritans. They were greatly disliked by the Jews (Those from the southern tribe of Judah) and were thought of as half-breeds.

Remember the Jonah story? Jonah hated the Ninevites, but was called to preach a message of judgment to them. Ninevah was a major city in Assyria. The king at the time repented and decided to follow God, but it wasn't long after that they changed their mind and attacked Israel.

Reading 2 Kings 17, we see that Israel wasn't the only kingdom that disobeyed God. Judah also disobeyed and was captured by a foreign kingdom, this time by Babylon about 150 years after the Assyrians conquered Israel.

Josiah (remember the boy king?) was one of the last good kings of Judah. After him Jehoahaz and Jehoiakim who both led Judah astray. Nebuchadnezzar was king of Babylon at the time and he attacked Jerusalem. He took control over Jerusalem and Jehoiakim became his subject. The next king of Judah was Jehoiachin and he was evil too. Nebuchadnezzar then attacked Jerusalem, took King Jehoiachin away to Babylon, removed everything valuable from the temple, and then took everyone but the poorest people from Jerusalem to Babylon.

Nebuchadnezzar removed Jehoiachin from power and installed his uncle Zedekiah to be king in his place, all the while trying to control everything they did in Jerusalem. Zedekiah rebelled against the King of Babylon and Nebuchadnezzar then ordered his army to beseige Jerusalem. They surrounded the city for 1 1/2 years until it was in a state of crisis with no food. Finally, the Babylonian army broke through the walls of Jerusalem and Judah's army scattered in fear. The Babylonian army ransacked the city, destroyed the temple Solomon built and burned the royal palace David built. They destroyed all the important buildings in the city and tore down the walls of Jerusalem. They carried away all of the people of Jerusalem to Babylon, except the poorest of the poor.

In upcoming lessons, we will learn about some of the things that happened to the Jews (those from Judah) while they were in captivity.

Have you ever moved cities? What was it like?

Today, we are going to learn about a time when the Israelites were forced to move from their cities to foreign countries.

Scripture The people of Israel were stubborn. They continued to commit all of the sins Jeroboam had committed. They didn’t turn away from them. So the Lord removed them from his land. That’s what he had warned them he would do. He had given that warning through all of his servants the prophets. So the people of Israel were taken away from their country. They were forced to go to Assyria. And that’s where they still are. 2 Kings 17:22-23

Heads up! The first Israelite History Quiz was in the Deborah & the Judges lesson

Heads up! This is a repeat activity from lesson 15

The End of Israel Craft

Scripture The people of Israel were stubborn. They continued to commit all of the sins Jeroboam had committed. They didn’t turn away from them. So the Lord removed them from his land. That’s what he had warned them he would do. He had given that warning through all of his servants the prophets. So the people of Israel were taken away from their country. They were forced to go to Assyria. And that’s where they still are. 2 Kings 17:22-23 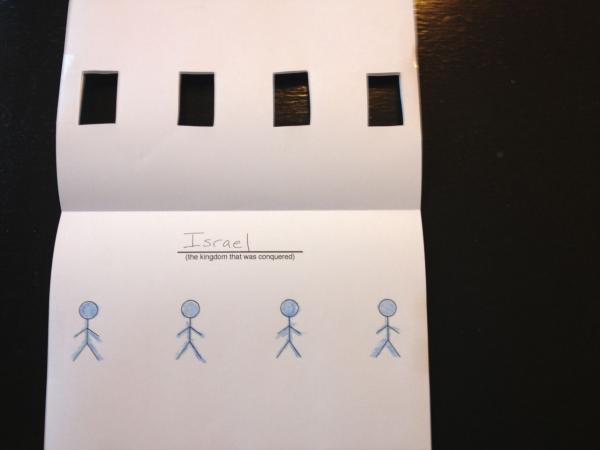 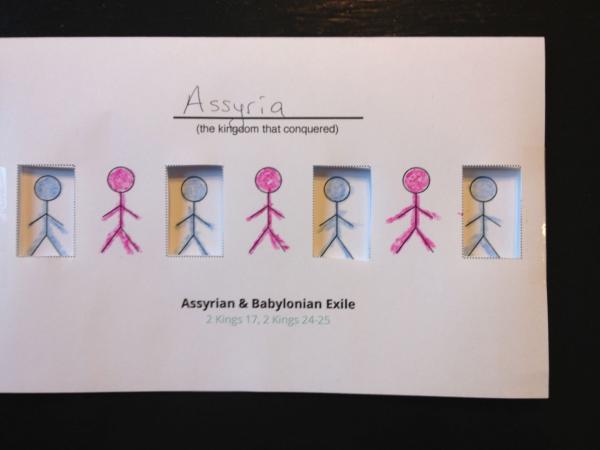