This story is a continuation from the previous story (Peter and John Heal a Crippled Beggar). Be sure to review that story if you did not teach last week.

Peter and John Put in Prison and Threatened the First Time

Peter and John were relentless about making sure everyone around them knew that the miracle they performed was not in their own power, but was because they healed in the name of Jesus and through his power. This got the priests and some of the other religious leaders of the day very nervous. Remember that just before this incident Peter had preached to the crowd on the day of Pentecost and over 3,000 people joined the disciples. According to Acts 4:4, now there were over 5,000 men who were believers. Things were spiraling out of control very quickly for the Jewish leaders. In just 2 short months they had crucified Jesus, watched him appear after his resurrection, and then witnessed the day of Pentecost and the establishment of this quick-growing movement of believers who were meeting every day in homes and in the temple courts. Additionally, the Sadducees were a group of Jews that didn't believe in the resurrection (or life after death). So they also had a theological disagreement with the disciples to begin with.

So the religious leaders confronted them and put them in prison overnight until they could get the whole council together. They asked Peter and John: “By what power did you do this?...And through whose name?” This just gave Peter another opportunity to clearly share with them about Jesus! They really wanted to punish Peter and John, but right in front of them stood this man who was over 40 years old, had been crippled from birth, and now was walking around the temple because Peter and John healed him. What could they do? So they let them go with a stern warning not to preach anymore.

Peter and John returned to the other believers and told them about everything that happened. So they prayed to God: "Now, Lord, consider the bad things they say they are going to do. Help us to be very bold when we speak your word. Stretch out your hand to heal. Do miraculous signs and wonders through the name of your holy servant Jesus." (Acts 4:29-30).

Notice they didn't ask whether they should continue to speak the word of Jesus. They just asked God to handle the threats and allow them to continue to preach.

The Apostles are Put in Prison and Threatened Again

The apostles did just as they said they were going to do and God answered their prayers. They continued to heal people in Jesus' name and preach to them the Good News. So the religious leaders put them in prison again! This time, during the night, an angel came and opened the prison doors and told the apostles to go back to the temple and continue to preach the Good News! Nothing could stop these early church leaders from preaching about Jesus!

So early the next day, there they were in the temple courtyard preaching again. The religious leaders showed up and asked the guards to get them out of prison to put them on trial. But they weren't there! So they brought them in again and questioned them: "We gave you clear orders not to teach in Jesus’ name...but you have filled Jerusalem with your teaching. You want to make us guilty of this man’s death." (Acts 5:28)

The disciples' response was clear: "We must obey God instead of people! You had Jesus killed by nailing him to a cross. But the God of our people raised Jesus from the dead. Now Jesus is Prince and Savior. God has proved this by giving him a place of honor at his own right hand. He did it so that he could turn Israel away from their sins and forgive them. We are witnesses of these things. And so is the Holy Spirit. God has given the Spirit to those who obey him."

Well, that just about set the religious leaders over the edge. They wanted to put the disciples to death right there! But one of them cautioned them not to. He told them that if what they were saying was a bunch of bologna, the movement would die out soon enough, and putting them to death would just prolong the movement and incite the people.

So instead of putting them to death, they had the disciples whipped and threatened them not to preach about Jesus anymore. But.... "The apostles were full of joy as they left the Sanhedrin. They considered it an honor to suffer shame for the name of Jesus. Day after day, they kept teaching in the temple courtyards and from house to house. They never stopped telling the good news that Jesus is the Christ." (Acts 5:41-42) 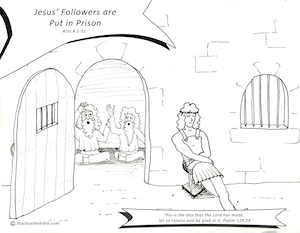 Have you ever told someone about Jesus? If a friend came to you and asked you about Jesus, what would you say?

For older children, read the story from an age-appropriate Children's storybook Bible or read directly from the Bible.

Scripture The apostles were full of joy as they left the Sanhedrin. They considered it an honor to suffer shame for the name of Jesus. Day after day, they kept teaching in the temple courtyards and from house to house. They never stopped telling the good news that Jesus is the Christ. Acts 5: 41-42

Scripture When the believers heard this, they raised their voices together in prayer to God. "Lord and King," they said, "you made the heavens, the earth and the sea. You made everything in them...Help us to be very bold when we speak your word. Stretch out your hand to heal. Do miraculous signs and wonders through the name of your holy servant Jesus." Acts 5:24-30

Heads up! Get a list of gift ideas from your missionary family

Tie up the children

Scripture When the believers heard this, they raised their voices together in prayer to God. "Lord and King," they said, "you made the heavens, the earth and the sea. You made everything in them... ...Help us to be very bold when we speak your word. Stretch out your hand to heal. Do miraculous signs and wonders through the name of your holy servant Jesus." Acts 5:24-30

Scripture When the believers heard this, they raised their voices together in prayer to God. "Lord and King," they said, "you made the heavens, the earth and the sea. You made everything in them... ...Help us to be very bold when we speak your word. Stretch out your hand to heal. Do miraculous signs and wonders through the name of your holy servant Jesus." Acts 5:24-30