In the last lesson, we learned about 3 Israelites (Shadrach, Meshach, and Abednego) who served in King Nebuchadnezzar's court during the Babylonian captivity. Today, we're going to learn about another Israelite named Daniel who was there with him.

Daniel was doing very well for himself serving the king, but he didn't want to defile himself with the king's food. The guy in charge of Daniel was nervous that Daniel would not be as healthy as the other men in his care - and that he would get in trouble with the king for it!  But Daniel convinced him to let him, Shadrach, Meshach, and Abednego try it for 10 days to see what would happen. The test was successful and the man in charge saw that their diet was actually making them look better than the others, so he let them stay on the diet permanently. Those four continued to learn and grow in wisdom and became the cream of the crop among all the other Israelites. And Daniel had a special skill as well: he could interpret dreams! (remember who else in Israel's history had a special gift for interpreting dreams?)

The Handwriting on the Wall

Remember King Nebuchadnezzar? He is the one who carried Judah away into captivity in Babylon. He was removed from the throne by God because he was proud and had a hard heart towards God. His son, Belshazzar (not to be confused with Belteshazzar, Daniel's Babylonian name...) became King. He did something very bad. His father removed all sorts of items from the temple in Jerusalem - like gold and silver cups. Well, Belshazzar decided to have a big party and drink wine from them! Remember how careful God was to plan out the temple and all the rules and regulations he gave David and Solomon for its use? You can imagine that this was not a good thing Belshazzar was doing.

So, In the middle of his party, the fingers of a human hand appeared and wrote four words on the wall: MENE, MENE, TEKEL, PARSIN. King Belshazzar was very afraid. His face turned pale and it looked like he saw a ghost! No one could tell him what the words meant - but Daniel. Daniel explained that God was judging him because of his hard heart and because of what he was doing with the things he brought from God's temple. The four words are actually words for currency and weights (in today's words, it might have been, "a couple, a couple, a dime, and a half"). The king's advisors couldn't figure out what they meant. But Daniel was able to look beyond the superficial meaning through God's wisdom:

MENE - God has numbered the days of your kingdom and brought it to an end
TEKEL - You have been weighed in the balances and found wanting.
PARSIN - Your kingdom has been divided and given to the Medes and the Persians

That very night, King Belshazzar was killed and Darius (a Mede) became king.

Daniel in the Lion's Den

Daniel continued to find favor in the kingdom, and the other rulers weren't very happy with him. They were jealous. So, they came up with a plan to trap Daniel. They convinced King Darius to pass a law that everyone in the kingdom must only worship him for the next 30 days. And if they didn't - they would have them thrown in a den of lions to be destroyed. But Daniel was steadfast in his worship of God, and went back to his house and prayed to God. The other rulers were following him, waiting for him to break the law, and it didn't take long. So, they ran back and told King Darius the news. Now, Darius wasn't very happy about this, because he liked Daniel. But he had made the law, and he had to follow through with the punishment.

Of course, the rest of the story is "history", and Daniel was spared in the lion's den. An angel came to protect him overnight (maybe the same one that protected Shadrach, Meshach, and Abednego?) and he was unharmed. Then Darius threw the men that accused Daniel into the lions' den, and they weren't protected by an angel... 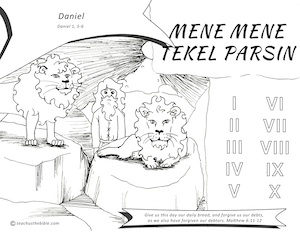 This coloring sheet depicts the 10-day diet Daniel was on (the Roman numerals), the handwriting on the wall (Mene, Mene, Tekel, Parsin), and Daniel in the lion's den

What is your favorite food? Is that food healthy for you?

Today, we are going to learn about a man in the Bible who chose not to eat certain foods because he wanted to stay obedient to God and to be healthy.

Scripture Daniel said to him, "Please test us for ten days. Give us nothing but vegetables to eat. And give us only water to drink. Then compare us with the young men who eat the king's food. See how we look. After that, do what you want to." So the guard agreed. He tested them for ten days. After the ten days they looked healthy and well fed. In fact, they looked better than any of the young men who ate the king's food. So the guard didn't require Daniel and his friends to eat the special food or drink the wine. He gave them vegetables instead. Daniel 1:12-16

Scripture My God sent his angel and shut the lions' mouths, and they have not harmed me, because I was found blameless before him; and also before you, O king, I have done no harm." Daniel 6:22

Scripture So he sent the hand that wrote on the wall."Here is what was written. mene, mene, tekel, parsin "And here is what those words mean. Mene means that God has limited the time of your rule. He has brought it to an end. Tekel means that you have been weighed on scales. And you haven't measured up to God's standard. Peres means that your authority over your kingdom will be taken away from you. It will be given to the Medes and Persians." Daniel 5:24-28